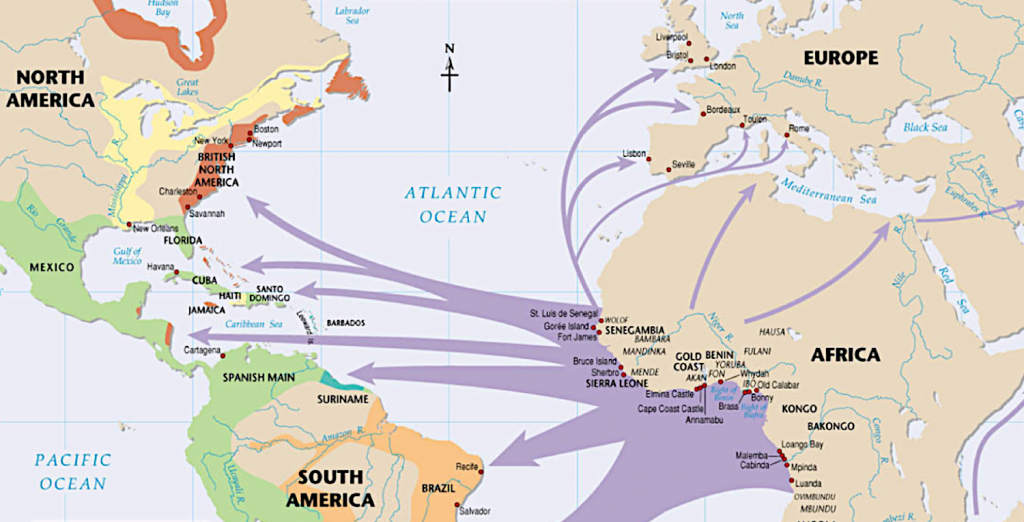 An issue immediately occurs when attempting to view the history of racism and white supremacy from the perspective of colonialism, the exploitation of labor, and color – or these things alone. At various times and to varying degrees, the color-line existed within the colonies and later states within the Union. The development of color in relation to caste and then in relation to race is something that developed over time (black codes and slave codes; slavery and the slave-trade; racial violence and revolts; re-institution of slavery; Jim Crow and redlining, etc.). Colonization took place on land inhabited by indigenous populations. Indentured servitude, along with peasants and serfs, historically, and later wage-slaves, existed within racial lines. Those with African lineage, as well as other groups, such as from Indian tribes, participated in owning slaves, the slave trade and indentured servitude.

Colonization, out of the relation to the economic expansion of European nations, must be understood as the starting point, and the starting point alone, for the development of white supremacy. Connected was that development in relation to the ultimate use of black labor, particularly in the American South. This essay is not for the purpose of providing an explanation as to why enslaved Africans became preferred over other forms of labor exploitation, and it is not to compare the competitive nature of the various colonial powers and their differences. With regard to the latter, however, in terms of hindsight, it can be evidenced by virtue of the relative successes of the British and American Empires that the role white supremacy came to play in the development was a direct, contributing factor. As is also, in part, evidenced by the two world wars, the consolidation into a unified “whiteness” took place more within the context of dominance and hegemonic power of particular nations and states over the rest.

Nonetheless, through colonialism and slavery, one can see the ideological functioning of racism and white supremacy, at its conception. From the start, with the stripping of particular groups of African peoples of their own native, cultural, religious, and so on, identities, and labeling them through political means of categorization, as black, negro, colored, and so on, one can see how the relevant concept of race developed. Through the actions carried out by certain entities and the impact on the identification of these enslaved individuals and their descendants, there developed through the re-development of culture, within a social and political-economic context, the identity as black. This identity, historically, developed along the lines of first identifying as African, then as American Negroes or colored, then as black or African American.

The institution of slavery itself represented one of supremacy and dominance, clearly of one group of people over another; and in large part, in the American South, this was represented along a color-line. However, with the American Civil War and passing of the Reconstitution (or War) Amendments to the Constitution of the US, it was clearly established by the highest law of the land that former slaves and other free blacks were American citizens, that slavery was abolished and that equal protection was established.

That leaves a two-part development: one, the development of slavery, or the general exploitation of labor in the American South, as being an institution based on a color-line; two, the maintenance of a color-line within the context of the abolition of slavery and establishment of equal protection–(for either of these see sources particularly on slave codes and black codes, as well as Jim Crow and re-institution of slavery).

The next development, closely tied with the above, is one of turning the color-line into a firmly established racial category in contradistinction to “whiteness”. This is done more through the ideological consolidation of the various European races immigrating to the U.S.

It must be noted here that the condition of black Americans, historically and today, is not a condition that can be attributed to racism. It has to be understood with regard to the development of the concept of racism over time and the development of white supremacy. Various other groups, such as Asian groups, Italians, Irish, Jewish, German, African groups, and others of African descent, etc., have experienced success in America despite what might be described as racism or colorism.

With regard to racism, there are two key aspects. The first is the imposing of a definition suitable to the continuation of white supremacy and racist ideology. You will find this in the dictionary definition, such as quote: “Prejudice, discrimination, or antagonism directed against someone of a different race based on the belief that one’s own race is superior.” The second is the imposing of the basis of race as a concept, specifically deviating from a conception of race as applying to any large number of varying groups. These groups of people are ideally understood as divided only by a connection to nationality and lineage. This is completely arbitrary and baseless in terms of scientific and biological classification. That concept of race was transformed into that, in which, there are a small number of racial categories often black/Negroid/African, white/Caucasoid, Asian/Mongoloid.

If one is sharp, one might first notice the use of terms and concepts related to and/or including prejudice, discrimination, and bigotry. One might further notice the implications that arise from these terms, particularly the ability to be applied to things defined outside of concepts of race, e.g., religion, sex, perversion, color, height or weight, looks, etc. Also, it is revealed that a concept of race (or racism) is already being presupposed in this definition of racism. As a result, this is begging the question with regard to the definition. If one takes the classic meaning of the suffix -ism (as of or pertaining to an action or ideological quality) together with race, to result in the overall meaning of racism, it is quite obviously the case, then, that how race is being conceptualized is what needs deliberation.

That latter part will lead directly into the second of the key aspects, but before I address that and continue to provide a proper definition of racism, I first need to address the supporting features of the dictionary definition. Besides, as is already implied by what was just discussed, the deliberate ignoring of how race is functioning as an ideological concept, which obviously wouldn’t even approach the impact, by defining racism in terms of bigotry, prejudice, and so on, one can distract from one’s own complicity in support for the ideology of white supremacy in the form of conscious or unconscious adherence (sentiment or belief) and perpetuation of a system, by simply denying the former.

In the case of white supremacy, which provides the foundation for contemporary racism, and thus serves as a basis for the definition of racism, through the descriptive term itself (‘white’), it is seen that a theory of race is already presupposed. As described above with racism, white supremacy also becomes problematic when viewed on the level of personal sentiment and belief, with ignorance of the wider ideological ramifications and functioning within a social and political-economic context. With both, there is a masking of the above mentioned and underlying conception of race foundational to white supremacy and representing the key racist ideology of rac[e]-ism. In addition, dealing with the topic in that obfuscating way, the objective (or properly actualization) and subjective dynamics in their totality are missed.

Racism is the ideology of a particular conception of race. Specifically, in the modern context, and with regard to white supremacy, this involves the division of people based on skin color (mainly white and black/non-white), usually together with and based on a continental understanding regarding European, African and Asian.

White supremacy is the ideology related to the dominance and superiority of various social relations within society, specifically those attributed to European influences, which work together as a totality: cultural, social, political, political-economic, scientific, religious, etc., also the establishing of these, in practice, through the use of violence.

Both of these require the establishing ‘white’ as a race. In previous times race divided people based on various lineages and nationalities, even backgrounds that included religious, e.g., Catholic, Jewish, etc. The stronger that ideological conception is, is in relation to the identification with ‘white’-[ness], over those national identities. This is something that was rather uniquely established within the context of the American system (see above including Nazi ideas in relation to the U.S.).

“That history may be epitomized in one word-Empire; the domination of white Europe over black Africa and yellow Asia, through political power built on the economic control of labor, income, and ideas. The echo of this industrial imperialism in America was the expulsion of black men from American democracy, their subjection to caste control and wage slavery (p. 48).”

“The fact that even in the minds of the most dogmatic supporters of race theories and believers in the inferiority of colored folk to white, there was a conscious or unconscious determination to increase their incomes by taking full advantage of this belief. And then gradually this thought was metamorphosed into a realization that the income-bearing value of race prejudice was the cause and not the result of theories of race inferiority; that particularly in the United States the income of the Cotton Kingdom based on black slavery caused the passionate belief in Negro inferiority and the determination to enforce it even by arms (p. 65).”

“We have found no evidence to support the ‘becoming white thesis’ in terms of change in the official racial classification of these groups in the record of social institutions such as U.S. censuses, naturalization laws, and court cases. Changes in the meaning of race in U.S. racial and ethnic lexicon explain why there is a discourse on how these non-Anglo-Saxon European groups changed their ‘races’ to white. If ‘becoming white’ did happen to these groups, its real meaning was a change in their social status from a minority group to part of the majority group rather than in racial classification.”

“Unfortunately, however, when most people use the term ‘race’ they do not do so in the sense above defined. To most people, a race is any group of people whom they choose to describe as a race. Thus, many national, religious, geographic, linguistic or cultural groups have, in such loose usage, been called ‘race’, when obviously Americans are not a race, nor are Englishmen, nor Frenchmen, nor any other national group. Catholics, Protestants, Moslems and Jews are not races, nor are groups who speak English or any other language thereby definable as a race; people who live in Iceland or England or India are not races; nor are people who are culturally Turkish or Chinese or the like thereby describable as races.

… Because serious errors of this kind are habitually committed when the term ‘race’ is used in popular parlance, it would be better when speaking of human races to drop the term ‘race’ altogether and speak of ethnic groups.

…at the present time most anthropologists agree on classifying the greater part of present-day mankind into three major divisions, as follows :

“‘While we argue phasing out racial terminology in the biological sciences, we also acknowledge that using race as a political or social category to study racism, although filled with lots of challenges, remains necessary given our need to understand how structural inequities and discrimination produce health disparities between groups,’ Yudell said.”