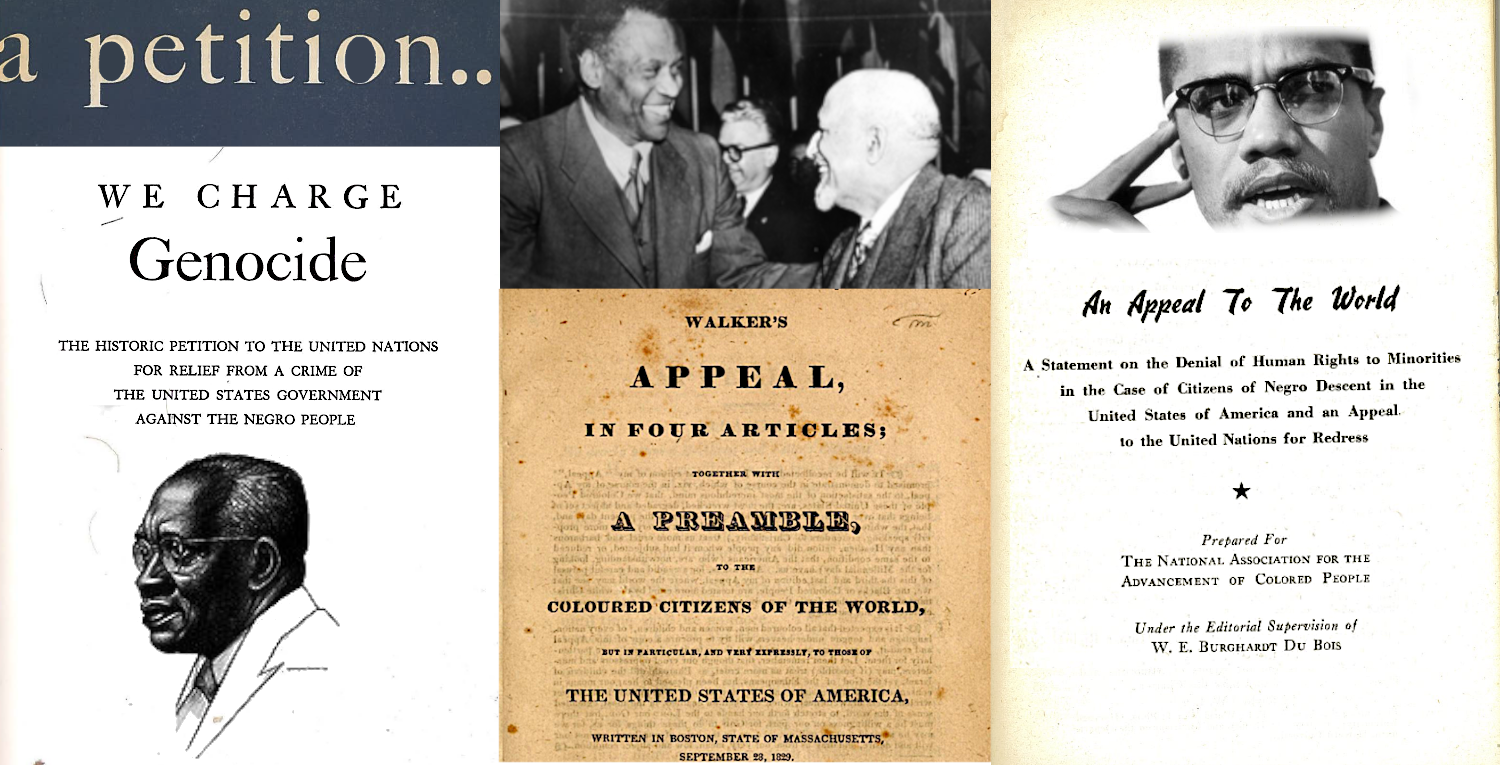 On my YouTube channel, there is a video concerning, as the title implies, Malcolm X, Human Rights & Black Americans Petitioning the U.N. In this video, I explain the importance of an international struggle for human rights and the benefits of framing the issues concerning black Americans as a matter of human rights and criminal violations. In addition to discussing Malcolm X’s role in re-invigorating this struggle, following his split with the Nation of Islam, I explain the previous petitions from the National Negro Congress, the N.A.A.C.P. (led by W.E.B. Du Bois) and the Civil Rights Congress (We Charge Genocide: led by William L. Patterson, and supported by Du Bois, Paul Robeson, and others).

Throughout the history of the struggle for black liberation and against colonization in the U.S., there has been a trend in the better parts toward an anti-capitalist, anti-colonialist and a global, pan-Africanist struggle. This a major topic of discussion in my series on the narrative surrounding integration. That series, in essence, serves as a history lesson, and modern-day guideline, on the framing of the black liberation struggle, as well as on white supremacist tactics, reaction, and counter-revolutionary measures.

As a part of my campaigns, the two major projects are respectively dedicated to human rights and reparations for black Americans. This is a significant movement that needs to be fully re-energized and finally carried to full fruition, not solely for the benefit of black Americans in the U.S. but for the liberation of all people, globally, in the fight against global capitalism and imperialist domination.

This was the reasoning behind my drafting of the document (available below) that provides an overview of human rights violations and an outline for comprehensive reparations.

A lot of individuals may be hesitant with declaring genocide in any situation, given the historical propaganda surrounding that issue. There is also the propaganda that has resulted in the devaluing of black concerns, emotional feelings, and lives. The latter has taken place within the unconscious of most Americans to the point of black lives being a matter of complete insignificance. In addition, this has been done to the effect that what is entirely devastating, wildly unreasonable and completely offensive and unacceptable by all human, moral, religious, and/or legal standards, can be continually allowed to happen and repeatedly ignored, if predominately perpetrated against black Americans.

However, when reviewing any legal framework, or even the historical precedent for the very founding of the United Nations, with regard to standards of international law and human rights, there is no more perfect example or situation expressing the need for an international response than that which is evidenced by the historical and presently continuing maltreatment of black Americans by dominate, white American society.

I need not go into the detail, here, about that which is already outlined extensively in my petition, and documented and sourced thoroughly in History of Black Liberation and Colonization: Timeline of Violence; 20th Century Targets; and Historical Sources & Notes.

I will, however, reiterate and insist upon the facts of international law pertaining, in the very essence of the standards, covenants, declarations, and conventions, to the situation in America.

From the original charters of the U.N., the mission was clear on protecting the rights of minority groups.

U.N. Charter: “We the peoples of the United Nations determined…to reaffirm faith in fundamental human rights, in the dignity and worth of the human person, in the equal rights of men and women and of nations large and small…”

” Article 1, Sec. 3: “The purposes of the [U.N.] are: To achieve international cooperation in the solving international problems of an economic, social, cultural, or humanitarian character, and in promoting and encouraging respect for human rights and for fundamental freedom for all without distinction as to race, sex, language, or religion.”

There was a consistent reaffirming and establishing major standards to the end of States having an obligation to provide and defend civil and political rights, self-determination and against racial discrimination, as is consistently violated in the denial of these to black Americans by the U.S.

Civil and Political Rights, Article 1, Sec. 1: “All peoples have the right of self-determination. By virtue of that right, they freely determine their political status and freely pursue their economic, social and cultural development.”

” Article 2, Sec. 1: “Each State Party to the present Covenant undertakes to respect and ensure all individuals within its territory and subject to its jurisdiction the rights recognized in the present Covenant, without distinction of any kind, such as race colour, sex, language, religion, political or other opinion, national or social origin, property, birth or other status.”

Genocide was defined clearly within guidelines that are, in practice, represented in the intent that has been consistently within the goals of white supremacy in the U.S. from its founding, to either regulate black Americans to a perpetual bottom-caste or eliminate them completely, killing any and all leaders who dare to challenge that pervasive ideology and in complicity by providing no protection in cases where citizens or private entities have taken it upon themselves to carry out these goals with and without state assistance.

Convention on Genocide, Article 1: “The Contracting Parties confirm that genocide, wither committed in time of peace or in time of war is a crime under international law which they undertake to prevent and to punish.”

” Article 2: “…genocide means any of the following acts committed with intent to destroy, in whole or in part, a national, ethnical, racial or religious group, as such: (a) killing…; (b) causing serious bodily or mental harm…; (c) deliberately inflicting…conditions of life calculated to bring about physical destruction…; (d) imposing measures intended to prevent births; (e) forcibly transferring children…to another group.”

The history of this behavior fits clearly within a pattern – the entirety of the maltreatment spanning a 500 (or so) year period and the entirety of the current constitutional framework establishing the present-day U.S., providing a complete shattering through of any standard on issues that can no longer be handled domestically.

In Human Rights Council Procedures: “‘patterns of gross violations’ were considered as those that were so severe that they could ‘no longer [be] regarded as falling exclusively within the domestic jurisdiction of States.'”

There has been repeated insistence on the behalf of black Americans going back to colonial Americans through David Walker’s Appeal, abolitionists, Reconstruction, post-Reconstruction and the Civil Rights Movement, all the way up to individuals and groups today. There has on the opposing side been consistent exclusion, punishment, and violence.

The U.N., having already got involved (but not yet as needed, to the point of action) in placing pressure to pass reparations and deal with the issues, pointing out, also, the presence of human rights violations, this evidences the facts even more.

U.N. Working Group Report (2016), 9, pg. 4: “Despite substantial changes since the end of the enforcement of Jim Crow and the fight for civil rights, a systemic ideology of racism ensuring the domination of one group over another continues to impact negatively on the civil, political, economic, social and cultural rights of African Americans today.

” 68, p. 16: “Despite the positive measures, the Working Group remains extremely concerned about the human rights situation of African Americans. In particular, the legacy of colonial history, enslavement, racial subordination and segregation, racial terrorism and racial inequality in the United States remains a serious challenge, as there has been no real commitment to reparations and to truth and reconciliation for people of African descent. Contemporary police killings and the trauma that they create are reminiscent of the past racial terror of lynching. Impunity for State violence has resulted in the current human rights crisis and must be addressed as a matter of urgency.”

” 94, p. 20: “the Commission to Study Reparation Proposals for African-Americans Act — which would establish a commission to examine enslavement and racial discrimination in the colonies and the United States from 1619 to the present and to recommend appropriate remedies. The Working Group urges the United States to consider seriously applying analogous elements contained in the Caribbean Community’s Ten-Point Action Plan on Reparations, which includes a formal apology, health initiatives, educational opportunities, an African knowledge programme, psychological rehabilitation, technology transfer and financial support, and debt cancellation.”

The common understanding of major atrocities in the category of international human rights issues is particularly connected to events such as the Holocaust and Apartheid. These are events and societies that can be said to form only variations, applications or models based on the American system of slavery and the regulation of black Americans to a racial caste at the bottom of (and in the maintaining of) America’s social order (see historical notes).

Human rights, through U.N. documents and declarations, are also particularly connected to situations of colonial domination. A situation existing in the form of settler colonialism in the U.S., going back to the imperial and colonial project of the British, that has continued in the imperial project of the U.S. with their utilization of black Americans as a colonized caste to be either enslaved, exploited and/or violently victimized and repressed.

Durban (2001), 13, p. 6: “We acknowledge that slavery and the slave trade, including the transatlantic slave trade, were appalling tragedies in the history of humanity not only because of their abhorrent barbarism but also in terms of their magnitude, organized nature and especially their negation of the essence of the victims, and further acknowledge that slavery and the slave trade are a crime against humanity and should always have been so, especially the transatlantic slave trade and are among the major sources and manifestations of racism, racial discrimination, xenophobia and related intolerance, and that Africans and people of African descent, Asians and people of Asian descent and indigenous peoples were victims of these acts and continue to be victims of their consequences.”

” 14, p. 7: “We recognize that colonialism has led to racism, racial discrimination, xenophobia and related intolerance, and that Africans and people of African descent, and people of Asian descent and indigenous peoples were victims of colonialism and continue to be victims of its consequences. We acknowledge the suffering caused by colonialism and affirm that, wherever and whenever it occurred, it must be condemned and its reoccurrence prevented.”

” 15, p. 7: “We recognize that apartheid and genocide in terms of international law constitute crimes against humanity and are major sources and manifestations of racism, racial discrimination, xenophobia and related intolerance, and acknowledge the untold evil and suffering caused by these acts and affirm that wherever and whenever they occurred, they must be condemned and their recurrence prevented.”

” 99, p. 17: “We acknowledge and profoundly regret the massive human suffering and the tragic plight of millions of men, women and children caused by slavery, the slave trade, the transatlantic slave trade, apartheid, colonialism and genocide, and call upon States concerned to honour the memory of the victims of past tragedies and affirm that, wherever and whenever these occurred, they must be condemned and their recurrence prevented.”

With that, I present the petition below; and on the grounds stated above and documented in my notes and sources, I urge your support.

If you could, please download and/or read the document online. Share on social media or otherwise. Go to the support page on this website and join. Push these issues in every way that you can: both in your community and on a national, and especially an international, level.

This site uses cookies to ensure the best user experience. By continuing to browse this site, you accept the use of cookies for the above purposes.