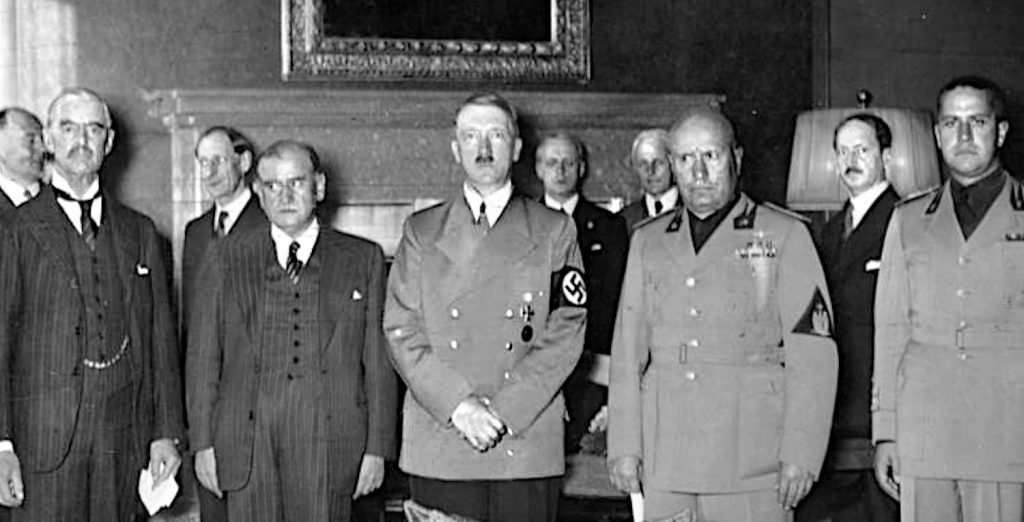 15 Points Connecting the U.S. and Britain to the Nazis and Fascist Ideology and Policy

Nazis and Hitler are often associated with the worst possible of all movements and sets of events in history, represented usually by WW2 and the Holocaust. These associations have been perpetuated to the point that ‘Hitler’ and ‘Nazi’ as associated terms have become symbols and synonyms for any-and-every bad person or group with which another group disagrees and seeks to ridicule and label as dangerous and objectionable. Despite this being for good reason – based on what the Nazis were and what they represented and perpetrated – it leaves out historical context, and it has an effect of being propaganda to cover-up the atrocities committed by other groups. This is especially the case – or almost entirely the case – with regard to other Western nations, such as Great Britain and the United States.

The U.S. (also Great Britain) through the actions of capital, politicians, military figures, and other individuals, groups, societies, and organizations, represent not only wildly more horrific and heinous acts over a much large portion of history, but they also served as the major influence and support for the rise of Nazism and the ideological structures used as the basis for the Nazi’s actions and behaviors.

A primary topic of interest for this site is black history, specifically with regard to the U.S. This includes the crimes and atrocities committed against black Americans. A lot of these crimes, individuals participating in these actions, or those that served as white supremacist apologist over the years, stand as historical examples, major influences, and as primary predecessors, to events and actions that took place not only with Nazi Germany but Apartheid South African and other instances of grave human rights violations.

However, unlike the atrocities of Nazi Germany, which will be discussed in relation below, the crimes of the U.S. and the Democratic Party, with their Republican, political duopoly, have never been properly addressed with the contempt and ridicule that is associated either with the Nazism they helped build or the fascism that they created and perfected in America. With the human rights atrocities still taking place in the U.S. today, I felt the need to address in this article some of the major connections between the historical events that took place in and led to Nazism in Germany and the events, institutions, and cultural symbols, in the U.S., that predated the German events and some that represent fundamental tendencies and attributes of American society.

Before moving forward, I would like to emphasize a point that I also feel is important to keep in mind when reviewing the facts that will be delivered below: that is the role that the U.S. and British played in WW2, not as an opponent of the Axis powers, specifically Nazi Germany, but as themselves being involved in the shaping of the rise of Nazism and coordination in seeking their own financial and strategic interests toward dominance and hegemony at the expense of the tens to hundreds of millions of lives that were lost during the period involving both of the World Wars. This will not be a lesson in world history or the history of these time periods, so it will be up to the reader of this to come armed with or subsequently seek more information and research on the subject. I would like, however, to point out the parallels between the events happening around the American Civil War and white supremacist policy as covered in the introduction to my series on integration. There you will see the policies of separation, assimilation, and genocide, that characterized the behavior of white supremacists in America toward blacks and native tribes and were adopted by Nazis with regard to groups they opposed, including communists and Jews. Also, as with both events, you can see the moves and events as controlled by global capital in building and maintaining power. This is with the American Civil War being followed immediately by the Gilded Age, a failed Reconstruction, and the introduction of Jim Crow transitioning from Slavery, and WW2 being followed by the building of America as the preeminent world power, a Cold War, and the implementation of a domestic system of Mass Incarceration and finance capital in a shift away from Jim Crow following the Civil Rights Movement.

1. Symbol/Swastika – Following 19th century, colonial exploration, the swastika started to become a widely used symbol, especially in the early 20th century. It was used by military units, including American ones during World War One, it was also used by companies, such as Coca-Cola and organizations such as the Boy Scouts. However, given Nazi occultism and symbolism, as well as other connections to the group, the Theosophical Society, which was formed by Helena Blavatsky in America in 1875, serves as a key use of the symbol in a modern context and with the 45-degree turn.

2. Salute – The well-known Nazi salute is also known as the Bellamy salute, and it originated in 1892 to accompany the American Pledge of Allegiance. The pledge itself, when thinking about it is already, in its very nature, a nationalistic and fascistic expression, particularly in the American variation. The behavior is very telling, particularly with the white supremacist underpinnings to U.S. society and American nationalism, especially at that time.

3. National Socialism – The blending of both nationalism and socialism into a fascistic expression that appeals to workers (or diverts workers away from socialism) is also a rather strange phenomenon. It also traces back to America before the rise of Nazism.

4. Paramilitary groups – The Nazis were known for the Brownshirts and other paramilitary groups used to gain political power, as well as to maintain it. Going back, however, during the era following the Civil War in America, the KKK groups, Red Shirts, White Leagues, and Rifle Clubs, were formed to retake Southern government and maintain power and white supremacy in the South. and in American, generally. The most notable being the Red Shirts which share a similar name, purpose, and symbolism both with Italian groups and the Nazi Brownshirts.

5. Untermensch/underman/subhuman – Various American white supremacists had views on the inferiority of blacks and other races. One, in particular, was Lothrop Stoddard who referenced the “under-man” in his 1922 book The Revolt Against Civilization: The Menace of the Under-man.

6. Aryan race – This was also used by Theosophy/occultism and was from the adoption of the concept from linguistics and other scientific classifications that blatantly rejected the supremacist and non-linguistic usages.

8. Jewish/Bolshevik canards – There was propaganda pushed by Britons Publishing Society and in the U.S. to oppose communism, particularly with the rise of the Soviet Union and link to anti-Jewish sentiment. The Protocols of the Elders of Zion were pushed, including by individuals like Henry Ford, until later held as being fake.

9. Nuremberg Laws – There is an overall connection to white supremacy and U.S. ideas and treatment of blacks and other groups. One can see the treatment of blacks in America, and legal structures such as the black codes, Jim Crow laws, slave laws, anti-miscegenation laws, voting laws, etc.

10. Zionism/Relocating Jews – The original notion of Zionism during this time period was pushed and facilitated by the British.

11. Eugenics, sterilization, execution – Applied eugenics and the American Eugenics Society–up to and including ideas about/use of gas chambers–can be traced to America.

12. The funding and the support (see US companies/elites that supported Nazis).

14. Hitler makes decisions in WW2 in favor of Britain. The action is weak against Britain. He eventually turns around and attacks the Soviet Union. The Soviet Union, the British and the U.S. become enemies after WW2 and throughout the Cold War.

15. Holocaust – The violence against black Americans including the massacres, torturing, lynchings, burning of individuals, and boxing in and setting on fire of towns of houses, businesses, men, women, children, etc., was ongoing in the U.S.